Belgium artist, Tamino, hasn’t surfaced in America just yet, however we can guarantee he won’t be your “pocket-artist” very long. With his chanteuse-like mysticism and comparisons to enigmas such as Jeff Buckley and Leonard Cohen, Tamino Amir has begun to forge a path unlike his contemporaries. The 21-year-old musician of Belgian, Egyptian and Lebanese descent, harnesses his culture in his songs with subtle Arabic inflections and even uses the guitar his late grandfather Moharam Fouad—celebrated Arab actor and musician—passed down to him.

Tamino’s haunting lyricism and leering guitar accompaniment serve his rich vocal range, transfixing anyone in earshot. Throughout his childhood, his mother would play the likes of The Beatles, Tom Waits, Serge Gainsbourg, and a mirage of opera and jazz, from which the young musician draws from to compose a sweet vagueness—something he has already mastered and made entirely his own. In April of last year, Tamino released his self-titled debut EP with emotive pieces such as ‘Habibi’ (‘sweetheart’ or ‘my love’ in Arabic) and ‘Indigo Night’ which features Radiohead’s Colin Greenwood on bass. In these tracks one can hear a painful yearning and a dance between love and anguish; he accents these stories with his traversing voice going from woeful octaves to ethereal falsettos creating a visceral response.

More recently, Tamino has signed with Communion Records, and has released a new single titled ‘Persephone’ today. With the release, also comes the big announcement of his debut album Amir set to come out October 19th.

Read below where I had the pleasure of talking to Tamino about his songwriting, influences, and more in his first in-depth American interview.

When you first were writing music, you started with punk rock. How did you evolve into the sound you have today?

When I was a teenager, I think my lyrics were much more anger based—just feeling injustice. But when I picked up the guitar it was a natural result to use distortion and arrange sounds differently than I had before. Although my voice sounded the same to where it’s at right now, when I grew a bit older—I think—my emotions changed which has contributed to what I make now.

You have a varied sound, but the emphasis on your lyrics and the musical simplicity are throughout your first EP. Do you have any influences that shape how you go about it?

Well, I like a wide range of music. I think I just love music that claims its right for being—where you can’t go around it and it not be served as background music. That’s when I only really listen to music, when I sit down and fully engage in it. I never put it on just to have it in the background. For songwriting, it’s literature that inspires me. I absolutely love Khalil Gibran, who was a Lebanese writer who moved to America when he was quite young—I love almost all his work.

When making a song, does the instrumentation come first or do the lyrics? Where do you find inspiration?

That depends—mostly, music comes first but there are a few songs that I had lyrics for before the song fully formed. I know when something I’m working on is finished when I feel like I can say something with the music and let it stand on its own.

I typically write based on my own experiences, but I do observe as well. I’ll write down observations and sometimes they’ll find their way into a song. Some songs are maybe a bit more about exaggerated characters that represent aspects of my personality. Even though the songs are pretty personal, I find the themes are universal.

With your first EP, did you find it hard to choose the final tracks?

It was difficult to choose because I had already written a whole bunch of songs. We recorded 13 out 50, and then chose 5 from those 13, so it was very hard to decide on which ones would fit together in the best way—I’m happy with the way it turned out. Also, I just finished recording an album and it was kind of a similar process with finding the natural flow of the songs.

You have a new single out called ‘Persephone.’ Does the song have any relation to the Greek mythology or does it serve as a metaphor for something more personal?

I hide behind it in a way because the song started out as one of the most personal songs I ever wrote. I also really like Greek mythology and found that there were some parallels we shared, so why not use it? It seemed to be better for my ego. [laughs]

You’ve also announced the release of your debut album, ‘Amir’, due out October 19th on UK label, Communion. What has the process been like and how do you feel about it thus far?

Well, it’s been amazing because I live in Belgium and there are not many Belgian artists that are signed to big labels, like Communion. So, suddenly everything has become international which has been incredible. I get to tour different countries—a boy’s dream come true! [laughs]

Were you already in the writing phase before Communion came in?

I already had a few songs for the album that I had finished before signing with Communion, and then wrote the rest while in the studio.

Did you go in with a concept for your debut, or were the ideas more organic?

I think they started out organically, but as we started producing, we began making choices that were based in a concept and had elements that fit the sound we were creating. It was a very fluid process.

What was the concept?

There are definitely themes that feature throughout the whole album. A very important one is: the conflict between blinding romance and dissipating nihilism.

On one side, there is life-fulfilling romance that makes you float—so high that you can also fall very deeply. There is this feeling of love that is central, making everything beautiful and anything but love, void. It consumes you.

On the contrary, one also deals with overwhelming emptiness and apathy that ground you so profoundly that nothing seems to have sense. Your life is nothing more than a coincidental event that ceases at any given moment, which means that this all is insignificant. Sometimes you can’t cope with the impermanence of things. Therefore, you close yourself off from everything that you value.

Some songs are more on the romantic side, others more on the apathetic side. In my own life I can look at the world and at life in both ways depending on my state of being. This is reflected in the songs on this album. I also explore how this conflict creates an imbalance. A lot of the album is about finding that balance as well.

I feel like I could have only written this album now, now that I’m still very young and when a lot of things are new discoveries for me. Even though it might seem like a mature album for a 21-year-old, the themes are in my opinion very relatable to how a lot of people my age feel. In a way, a lot of the lyrics are quite naive. It was a conscious decision though, to capture this naiveté and to not polish it all too much, as that would have taken the sincerity away from the songs.

Why the title, Amir for the album?

That’s also part of the explanation on why I chose ‘Amir’ as the title for this album. It’s my second surname, an Arabic word which means ‘prince’. There’s a proudness to it that is also found in my music. For me it’s the perfect title for my debut album because it suits the themes in the lyrics: a prince is royal and proud but also has a lot to learn.

Another thing I like about ‘Amir’, is that it has something ‘meant to be’—a sense of succession. A prince does not choose to be a prince; he is born like that. It’s in his blood because of his ancestors. In that same vain, I don’t choose to be an artist. I’m born like this.

Even though the themes in the lyrics can be sad at times, the songs aren’t sad singer/songwriter songs. They’re proud songs. Comparable with  Arab song from the golden age. Tearing your heart out, but always with a straight back and a grandeur to it. 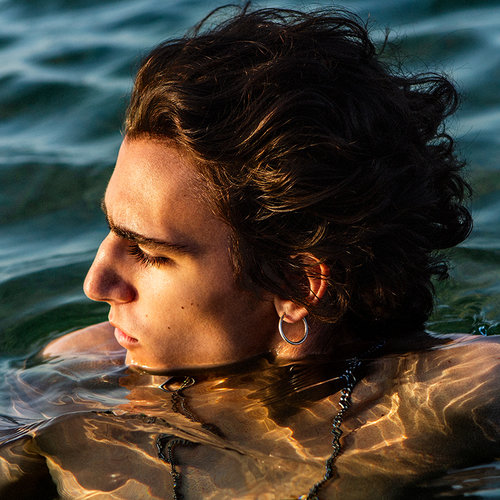 Your songs seem to convey a story while retaining a vagueness. Is that something you consciously choose or is there a natural separation?

I like to maintain a gray area with my songs, where one doesn’t really know what the song is about exactly. I give some direction, but I prefer to leave it to interpretation, because each time I perform, I myself find it carries new meaning.

In recent coverage, your vocal and playing style have been compared to the late, Jeff Buckley. How do you feel about that comparison?

I love his music and I’m very flattered by the comparison. However, those are big shoes to fill. I want to remain tethered to myself and have my music be my own. I think with comparisons like that, it brings expectations to the table that I didn’t necessarily ask for.

You’ve been making your way across Europe playing several festivals like Rock Werchter and a slew of solo shows. If you could choose a lineup of artists dead or alive, who would you choose?

I’d definitely choose James Blake as the headliner, Moses Sumney, Father John Misty—of course. Then I would choose some friends like Warhaus, and maybe a flute player.

Since you’ve started touring, what has been your favorite part and what do you look forward to?

Playing the show itself is the best feeling; the performance puts everything into perspective.

What’s a song you wish you wrote?

Probably a song from Leonard Cohen or Bob Dylan—they have so many. Also, I really like this band Iceage, from Denmark—I like what the singer has to say.

Do you have a favorite album of all-time?

For me, ‘Imagine’ by John Lennon is up there. My mom had played it all the time when I was young.

With big career milestones underway, how do you hope your music is received?

I hope when people listen to my music it commands their attention and goes beyond just the moment we are in—that would be amazing. I don’t need massive audiences, but it’s the greatest feeling to know my music is being heard internationally, whether it be a big crowd or a single listener. To know my music has reached someone like you in California is really cool, so thank you.

For news and tour dates: